Listen Now
Connect with us on Social Media
Events

Concert on the Lawn highly successful

UCCS Radio and OSA’s first joint concert, Concert on the Lawn, was highly successful on August 25. A crowd of over 500 showed up to the year’s first event, despite the fact that rain preceded the start of the outdoor concert.

The crowd appeared to enjoy the entertainment provided by Elliott Yamin and Hana Pestle. Pestle opened the night as she showed why she is a YouTube sensation. Yamin headlined the night with an upbeat performance and a wonderful rendition of his top 5 billboard song “Wait For You.”

“I couldn’t be happier with the turnout, the performance, and the collaboration between our sponsors and organizations which were involved in this event,” said station manager Brandon Ortega. “We started the year off with the highest attended UCCS Radio concert of all-time, this was exactly how we wanted to start what we envision as a very big year for our college radio station.”

UCCS Radio plans on hosting one or two more concert events this year. To stay up-to-date with UCCS Radio’s event and to listen to programming visit the website at radio.uccs.edu. One can also listen to UCCS Radio by downloading the new UCCS Radio Android Phone Application. 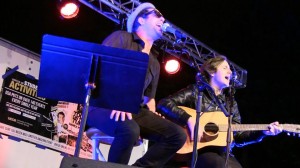 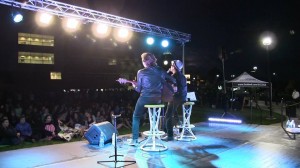 Elliott Yamin and Eric Scullin perform in front of a record crowd at UCCS.